Iryna Bohovych was born and raised in Ivano-Frankivsk, a town in the west part of Ukraine. She started skating in 2011 while working on her PhD in Aberdeen, Scotland. There she trained under British Junior National (Dance) qualifying coach Alexander Mackie. In 2012 she moved to the United States and continued working with local coaches. Iryna has earned a US Figure Skating gold medal for completing Adult Moves in the Field and a pewter medal at the Adult Bronze level during the 2015 Adult National Championships in Salt Lake City, Utah. She has also passed test for Adult Free Skate Silver, Pre Silver for Ice Dancing and Pre-Juvenile Moves in the Field at the standard track. She is a registered Basic Skills Instructor and has volunteered at Learn-to-Skate classes for four years  teaching all skill levels. Iryna also coaches groups, duets and individual skaters for show performances. Her skating goal is to pass her love for the sport to as many people as possible – children and adults alike.

Off-ice, Iryna is a Senior Research Associate in the Biochemistry department at UNL . Her research is directed towards understanding fundamental biological processes related to aging and disease. 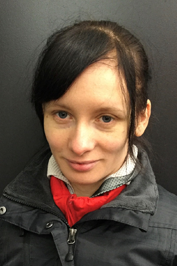 Contact Iryna for private lessons by emailing her at,